Yup darn sick of reading the Resident inherited the mess from Bush on the Liberal Economic Blogs and from the mainstream Communist News Networks too. Listen up aside from the facts that Bush and McCain tried to do something about the Fraud going on at Freddie and Fannie that I have read from intelligent authors and the video proof that has been widely circulated showing McCain trying to change things at long last and from all places and people comes the truth and remember the Resident voted for the Bailout and continues to play ball with his backers the bankers. Kudos to Mr. Sheer and The Nation for setting some of the Leftists straight! Some excerpts...
The huge expansion in collateralized mortgage and other debt, the bubble that burst, was the direct result of enabling deregulatory legislation pushed through during the Clinton years...
But whom do the Dems blame now that they have the White House and fifty-nine votes in the Senate and a seventy-eight-seat majority in the House? Their standard explanation for not doing more is, "We didn't have the votes." So when might we expect Democrats to achieve more? When they have eighty votes in the Senate?
If Democrats are reluctant to disturb the power of other major interests, it seems improbable that fundamental change will occur on healthcare, energy conversion or the restoration of work and wages. The problem now is the Democrats, not the Republicans.
Usury used to be illegal in the United States but it was "decriminalized" in 1980--the dawn of financial deregulation. A Democratic president and Congress repealed all interest-rate controls and the federal law prohibiting usury.
A roll call on usury would have compelled legislators to choose between their constituents and their bankers. Rep. Donna Edwards of Maryland proposed a tougher ceiling on interest rates, but the House rules committee rejected her amendment. "Our constituents are so angry with the banks," she observed, "siding with credit-card companies would not be helpful to me, and I expect that's true in other districts." Bankers are contributors, so this is what members call "a money vote." A consumer lobbyist explained. "Let's face it," he said. "The main reason lots of members get on the House Financial Services Committee is because they want to raise money from the financial industry."
Read the rest here.
Now whether or not it will have any real effect on those Leftists who read it that is debatable also from The Nation.

Dick Durbin could not conceal the bitter aftertaste. He told a hometown radio interviewer: "Hard to believe in a time when we're facing a banking crisis that many of the banks created--they are still the most powerful lobby on Capitol Hill. And frankly, they own the place." 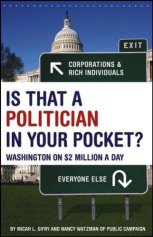 Durbin's disappointment may have included the former Illinois senator whom he had championed for president. Barack Obama took a walk on reform. Last year as a candidate, Obama declined to support the bankruptcy provision for the financial-bailout legislation, but he promised reform groups he would support it if elected. The White House wouldn't let reformers include it in the stimulus package or in Obama's first budget. The White House suggested the issue could proceed as a stand-alone measure (guaranteed to fail). On this important reform, the president stands with the sharks.

The Democratic Party ignores its left-liberal-progressive base with some regularity because it knows it can. Politicians understand they will suffer no consequences afterward. The galaxy of mediating organizations, including organized labor, that surrounds and supports the party may stomp and holler, but they do not attempt any retribution that might alter their relationship with power. Reform organizations will not withdraw their support, either money or rank-and-file voters. Nor will they seek to punish any of the wayward Democrats who regularly vote against them with opposition at the next election. The "white hat" reformers are Washington insiders themselves, with a seat at the table and influence on the substance of the party's agenda. They do not want to put their status at risk. Politicians know this from long experience.

And whose fault is this now? Who is in charge? Apparently no one with any competence.

It is time for them to start taking responsibility for the disaster they caused by voting for the Smelly One and the destruction the Leftists have wreaked upon America.