When Fascism comes to America well it has arrived ABC is now officially State Controlled News and I have often made comments about the Communist News Broadcasting known as our nightly news but the reality is this is a Fascist regime. The Looney Left used George Orwells 1984 as a blueprint not a lesson to be learned from.
That's right Liberals do not get it it the assertion was George Orwells book 1984 was written about the right..
"Orwellian" is now a universal shorthand for anything repressive or totalitarian
No, its more specific than that. Its shorthand for a regime in which the lie is decreed to be the truth, and the truth may not be spoken...
Mr. Orwell was a British Socialist, so he must have fooled a lot of brain-dead liberals. Jonah Goldberg (”Liberal Fascism”) has figured this out and wrote a book how much Obama and his Thugs are like Big Brother, the Ministry of Love, Victory Gin, etc? The title comes from HG Wells, the most strenuous intellectual advocate of totalitarianism on the early-20th-century British left. "I am asking for a Liberal Fascisti," he told the Oxford Union in 1932, "for enlightened Nazis. The world is sick of parliamentary democracy. The Fascist party is Italy. The Communist is Russia. The Fascists of liberalism must carry out a parallel ambition of a far grander scale."

Wells saw no difference between communism and fascism and Goldberg puts a compelling case that neither should we. Mussolini began as a socialist agitator. The Nazis were a national socialist party which despised bourgeois democracy and offered a comprehensive welfare state.

I agree that all totalitarianisms are essentially the same. Here in America, flustered liberal critics have had far greater difficulty with the notion that they and their predecessors are the inheritors of ideas that began in the fascist movement

I'm not sure I believe this.

Credit to Drudge of course, but reproduced here as Matt's "smoking gun" page gets changed from time to time, and this one is too important to let slip beyond the inevitable 30-second-long public attention span.

As far as I am aware this has never happened before in any administration - Democrat or Republican.

A free and independent press is one of the legs on which all representative governments rest. If we have lost it, The American Experiment's remaining time is short indeed.

UPDATED: I have personally authenticated the purported letter from the RNC via a phone call to their national headquarters. They have verbally confirmed it and promised to send me written confirmation by email.

On the night of June 24, the media and government become one, when ABC turns its programming over to President Obama and White House officials to push government run health care -- a move that has ignited an ethical firestorm!

Highlights on the agenda:

ABCNEWS anchor Charlie Gibson will deliver WORLD NEWS from the Blue Room of the White House.

The network plans a primetime special -- 'Prescription for America' -- originating from the East Room, exclude opposing voices on the debate.

Late Monday night, Republican National Committee Chief of Staff Ken McKay fired off a complaint to the head of ABCNEWS:

As the national debate on health care reform intensifies, I am deeply concerned and disappointed with ABC's astonishing decision to exclude opposing voices on this critical issue on June 24, 2009. Next Wednesday, ABC News will air a primetime health care reform “town hall” at the White House with President Barack Obama. In addition, according to an ABC News report, GOOD MORNING AMERICA, WORLD NEWS, NIGHTLINE and ABC’s web news “will all feature special programming on the president’s health care agenda.” This does not include the promotion, over the next 9 days, the president’s health care agenda will receive on ABC News programming.

Today, the Republican National Committee requested an opportunity to add our Party's views to those of the President's to ensure that all sides of the health care reform debate are presented. Our request was rejected. I believe that the President should have the ability to speak directly to the America people. However, I find it outrageous that ABC would prohibit our Party's opposing thoughts and ideas from this national debate, which affects millions of ABC viewers.

In the absence of opposition, I am concerned this event will become a glorified infomercial to promote the Democrat agenda. If that is the case, this primetime infomercial should be paid for out of the DNC coffers. President Obama does not hold a monopoly on health care reform ideas or on free airtime. The President has stated time and time again that he wants a bipartisan debate. Therefore, the Republican Party should be included in this primetime event, or the DNC should pay for your airtime.

Tune-a by the cockeyed world in two.
Throw your pride to one side, It's the least you can do.
Beatniks and politics, nothing is new.
A yardstick for lunatics, one point of view.

Good sense, innocence, crippled and kind.
Dead kings and many things I can't define.
Oh Cajun spice, sweats and blushers your mind.
Incense and peppermints, the color of thyme.

Sha-la-la, sha-la-la....
Remember that old saying as goes California so goes the rest of the nation? Could it be anymore appropriate with the Obamageddon in charge? Whoops....California going, going, gone!
From ZeroHedge... 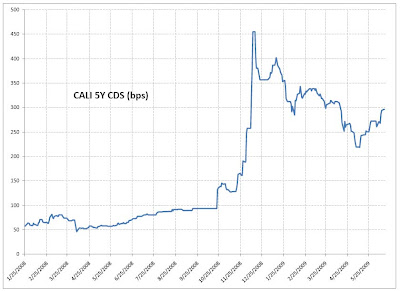 You need to read my 'unauthorized biography' of the boy...."Barack Obama: Nigger Hitler or Hitler's Nigger?"