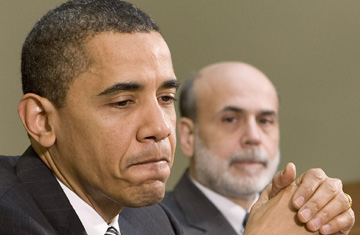 Does the Sun rise in the East? I see some of the big boys are starting to figure it out. A while back I threw down a blog really just so I could go back and reference it I called it No Banker Left Behind (maybe they have been reading my blog snicker).
Catherine Austin Fitts, Assistant Secretary of Housing and Federal Housing Commissioner under GHW Bush and Dillon Read & Co. Managing Director and board member, in her latest quarterly review, she predicts that "Obama will do more to help bankers achieve centralized control and one world government than any (previous) US politician. "In less than three months in office, he's shown bankers they can count on him - to the tune of trillions of dollars, further open-ended checkbook amounts on request, and global "diplomatic" pressure on targeted nations to surrender."
Just imagine when his peeps figure out he is Looting Taxpayers to pay back the generous bribes known as contributions he started raking in long before he ran for president ahaha just kidding his "peeps" are the bloodsuckers (Fed,Acorn) and what odd bedfellows they seemingly make.
I say seemingly because in reality both were necessary for him to achieve the power to destroy America. It would be fool hearty to waste a crisis you spent years helping to create after all. So government sachs does not like to be questioned as you can see I wonder if they will be coming after me?
Don't be STUPID, here it comes that is not really recovery we see, just more of the obama deception plan to Loot you and me.
Lori
Rise
http://www.globalresearch.ca/index.php?context=va&aid=14214
Big Boys
http://www.businessinsider.com/henry-blodget-is-obama-in-wall-streets-pocket-2009-4
http://www.bloomberg.com/apps/news?pid=20601039&sid=aNMQDysdnKRc&refer=home
Catherine Austin Fitts
http://www.opednews.com/articles/6/Obama-s-New-World-Order-by-Stephen-Lendman-090410-741.html
Gov. Sachs
http://www.telegraph.co.uk/finance/newsbysector/banksandfinance/5137489/Goldman-Sachs-hires-law-firm-to-shut-bloggers-site.html
http://www.goldmansachs666.com/
Stupid
http://market-ticker.denninger.net/archives/951-Do-Not-Be-Stupid.html
Here it comes
http://market-ticker.denninger.net/archives/950-To-Treasury-Here-It-Comes.html
Not a recovery
http://www.ritholtz.com/blog/2009/04/is-that-recovery-we-see/
To attend a Tea Party
http://taxdayteaparty.com/guide/
http://bluelori.blogspot.com/2009/03/no-banker-left-behind.html
Geithner, Paulson being sued
http://wnd.com/index.php?fa=PAGE.view&pageId=94539